Principal front and back cover art is the uncredited work (Story, Pencils, Inks, Letters) of the late Kenneth Fred Selig who was a long-time employee and managing editor at Harvey Publications. The seven thumbnail character sketches at left and the one thumbnail character sketch in the upper right (Sweetie Sack) represent the uncredited artwork (Pencils, Inks) of late cartoonist Fred Rhoads who drew 'Sad Sack' and many spin-off characters for Harvey Comics from 1953 through 1977.

One of Fred Rhoads' cute girl characters (Sweetie Sack) is introduced via a thumbnail. 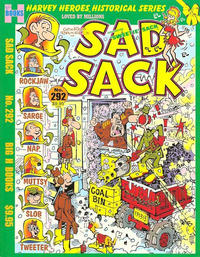 Good Work Out (Table of Contents: 6)

Good for a Laugh! (Table of Contents: 7)

First Line of Dialogue or Text
I'm promoting you to be in charge of the lower level of the dungeon, Knave Sack!
Genre
humor; historical; satire-parody
Characters
Knave Sack; The King; Black Knight; prisoners; the army
Synopsis
Knave Sack is promoted to be in charge of the dungeon's lower level only to learn that he is still doing all the work caring for its prisoners. Then, in an ironic twist, Knave Sack ends up doing even more work as the stone builders go on strike, the army goes on strike, and the prisoners go on strike.
Keywords
Black Knight; dungeon; kingdom; Knave Sack; loyalty; prisoners; stone builders; strike; The King; union

Muttsy Takes Over (Table of Contents: 10)

Place of Happiness (Table of Contents: 11)

Cartoonist Fred Rhoads weaves a compelling story about how time spent on vacation in nature with wild animals is more enjoyable than with humans. This story could quite possibly have been inspired by a rare vacation from his job as a 'Sad Sack' cartoonist for Harvey Publications which--according to his late wife Mattie Louise (Poston) Rhoads and in trial testimony during his 5-year court battle (see Rhoads v. Harvey Publications, Inc., 700 P.2d 840 (Ariz. Ct. App. 1984), 604 P.2d 670, and 124 Ariz. 406 (1979))--Fred Rhoads was kept busy nearly seven days a week writing stories, penciling, inking, and lettering 'Sad Sack' artwork for timely mail submission to Harvey Publications' New York headquarters.

Flipped Out (Table of Contents: 12)

First Line of Dialogue or Text
Let me tell you one of my sea stories, Cousin Sad!
Genre
humor; fantasy-supernatural; military
Characters
Sea Sack; Sad Sack; Polynesian girls; giant
Synopsis
Sad Sack is entertained by his Cousin Sea Sack who spins a yarn about getting shipwrecked from a typhoon onto a tropical island in the South Pacific; then must come to the aid of beautiful native girls to fend off a menacing native giant.
Keywords
beautiful native girls; giant; Polynesian girls; Sad Sack; Sea Sack

The Sack Comes Through! (Table of Contents: 16)

The Big Bluff (Table of Contents: 17)

Synopsis
blank inside back cover (p. 79)