Photo on cover is Stan Lee

Valley of Giants! (Table of Contents) 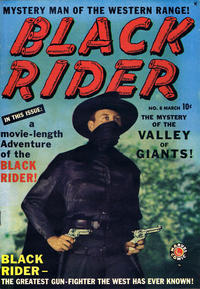 The Mystery of the Valley of Giants! (Table of Contents: 1)

Information from the Timely/Atlas group.
Michael J. Vassallo Notes: "The large splash panel looks to be Syd Shores, then there are pages with panels where I see Joe Maneely, then near the end John Severin shows up for 2 pages! I'm certain there are others also, possibly Heath also."

Jim Vandeboncoeur Jr Notes: "Let me just say that my notes pretty much echo Michael's on this one, though I see it as PRIMARILY a Maneely and Heath penciling job with some Shores and Severin assists. Bullpen inks (i.e. I don't know.)

Nick Caputo adds: "I agree with Mike and Jim on Shores, Severin and touches of Maneely throughout. I'd also add that Alascia inked the splash and many other pages."

Although the last page is numbered "18," there are two pages numbered "2" (note by Tom Lammers)

The Fastest Rising Star In Movies (Table of Contents: 2) (Expand) /

The Story of Bullet Ben (Table of Contents: 3)

The Spotted Invader! (Table of Contents: 4)