This issue went on sale on time. "Printed by Quad/Graphics, Montreal, QC, Canada. 03/18/11."
This issue has variants:

At Last... the Truth Behind the Black Ring (Table of Contents) 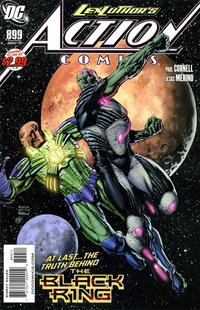 Genre
superhero
Characters
Lex Luthor; Robot Lois Lane [RoboLois] (destroyed); Brainiac; Mister Mind; Phantom Zone Creature
Synopsis
As Luthor and RoboLois approach the black spheres in orbit, Brainiac's ship arrives. Luthor acts surprised, but then reveals that he knew that Brainiac was behind many of the recent events, including RoboLois' betrayal. They fight, trying to outthink each other, but Luthor finally gets the upper hand, and breaks Brainiac's neck. While drones carry Brainiac off, Luthor activates the spheres, and the Earth-bound ones join them to form a portal. A powerful creature comes out. But Luthor was ready for it, and uses nanites from RoboLois to combine with it.
Reprints
Keywords
Headship