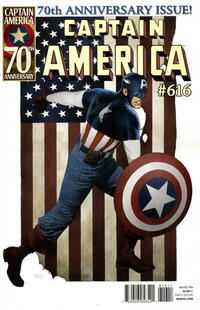 [Credits and Indicia] (Table of Contents: 2)

Genre
superhero
Characters
James Buchanan Barnes [also as Winter Soldier (in flashback)]; Ursa Major; Steve Rogers (flashback); Warden; Nicolai; Yuri Petrovich [also as Crimson Dynamo (in flashback)]
Synopsis
Bucky finds himself not only amongst indifferent jailers, but also in close contact with someone who holds a personal grudge against him.
Reprints

Must There Be a Captain America? (Table of Contents: 4)

The wartime flashbacks occur in 1945, a "few weeks" before Cap disappears.
The flashback plot (a wounded US soldier is replaced by a Nazi agent) is similar to the League of Hate plot in the first story in Captain America Comics #49 (August 1945).

The Exhibit (Table of Contents: 9)