First painted cover in this series. Cover has the "This is a King Feature" emblem. 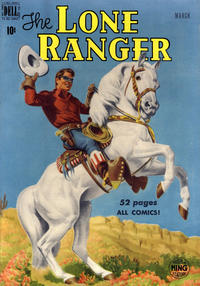 The Passing of the American Buffalo (Table of Contents: 1)

The Lone Ranger and The Plot to Kill Mr. Winters (Table of Contents: 2)

Genre
western-frontier
Characters
Lone Ranger; Tonto; Silver (horse); Scout (horse)
Synopsis
The Lone Ranger is mistaken for a crook who is trying to weaken a trestle so that a train carrying railroad official Winters will crash.
Reprints

Three tiers of panels per page.

The Medicine Watch (Table of Contents: 3)

Back cover. First in a series of portraits of unnamed Indian warriors.