The Secret Conquest of the Earth! (Table of Contents)

The original cover art for this issue also had the figure of the Flash penciled in below the Atom's figure, but it did not appear on the final version of the cover. 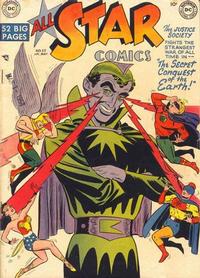 The Secret Conquest of the Earth! [Part I] (Table of Contents: 2)

Genre
superhero
Characters
Justice Society of America [The Flash [Jay Garrick]; Green Lantern [Alan Scott]; The Atom [Al Pratt]; Wonder Woman [Diana Prince]; Black Canary [Dinah Drake]; Hawkman [Carter Hall]; Dr. Mid-Nite [Dr. Charles McNider]]; Professor Matthews (anthropologist); The Four Kings of the Ancient Super-Race [Mr. Monarch; Mr. Prince; Mr. Crown; The Masked One] (villains)
Synopsis
The JSA have been missing for over a year with crime rampant and the threat of World War 3 a possibility. The tale begins a year before when the JSA was summoned by Professor Matthews to Africa. From him they learn the story of four ancient kings of a super-race, and they follow the Professor to a cavern containing a vacuum glass case holding the kings in suspended animation. The case is broken, releasing them...but the king's mental commands put the JSA into a year-long sleep. Returning to Civic City, they read of four leaders of new war parties, so the JSA splits up to tackle them.
Reprints
Keywords
Civic City; Civic City Clarion; Golden Lasso

The Secret Conquest of the Earth! Part II (Table of Contents: 5)

Genre
superhero
Characters
Justice Society of America [Hawkman [Carter Hall]; Wonder Woman [Diana Prince]; Black Canary [Dinah Drake]; The Flash [Jay Garrick]]; unnamed South American leader; The Blue Shirts (villains, all reform); The Gladiators (villains, all reform); Mr. Prince (villain, Super-Race King); Mr. Monarch (villain, Super-Race King)
Synopsis
Hawkman and Wonder Woman stop Mr. Prince from forcing a South America leader to declare war through mental influence, then convince the Blue Shirts that they are being duped by a king of an ancient super race. Hawkman and Wonder Woman try to apprehend the villain, who mysteriously vanishes before their eyes. Meanwhile, Mr. Monarch is hard at work in southeastern Europe trying to get the leader to declare war, but he refuses, so the new Gladiator Party of Monarch goes on a rampage until Black Canary and the Flash reveal that Monarch is an ancient king. With that, Monarch suddenly vanishes.
Reprints
Keywords
Golden Lasso

The Secret Conquest of the Earth! Part III (Table of Contents: 7)

Genre
superhero
Characters
Justice Society of America [Dr. Mid-Nite; The Atom [Al Pratt]; Green Lantern [Alan Scott]; Hawkman [Carter Hall]; Black Canary [Dinah Drake]; Wonder Woman [Diana Prince]; The Flash [Jay Garrick]]; Professor Matthews; unnamed African Sultan; Robert; Marie (Robert's husband); The Cavaliers (villains, nomads, all reform); The Swordmen (villains, all reform); The Four Kings of the Ancient Super-Race [The Masked One; Mr. Prince; Mr. Monarch; Mr. Crown] (villains, all die)
Synopsis
The Masked One and his Cavaliers are livid because the Sultan refuses to declare war, so he plans a trap that the Atom and Dr. Mid-Nite manage to foil the attempt and capture him...but he vanishes. Meanwhile, in the U.S., citizens are being mentally bombarded to force their Congressmen to declare war. So G.L. goes to Washington D.C. to battle Mr. Crown and his Swordmen, but, again, the villain vanishes into thin air. Back in Civic City, the JSA meets Professor Matthews, and all return to Africa to face the Four Kings for a final time, and thwart their launching of atomic missiles.
Reprints
Keywords
Blackout Bomb; Golden Lasso; Power Ring; Washington D.C.

This filler did NOT appear in the Archives.

To All Junior Justice Society of America Members (Table of Contents: 9) (Expand) /

This story did NOT appear in the Archives.

Credits from copies of editorial records sent to Gene Reed by Nelson Bridwell in 1986.

Watchdogs of the Sea (Table of Contents: 11)

This text story did NOT appear in the Archives.

Script credit from editorial records sent to Gene Reed by Nelson Bridwell in 1986.

[The Principle of the Steam Turbine] (Table of Contents: 12)

Genre
non-fiction
Characters
The Atom [Al Pratt]
Synopsis
The Atom, guest scientist for the month, gives step-by-step instructions on how to build a version of the steam turbine, which is the same basic principle used in turbojet engines.

This filler is NOT in the Archives.

Art credits from Gene Reed, formerly credited to Bruno Premiani, and, before that, both pencils and inks were credited to Purcell.

This feature did NOT appear in the Archives.

This PSA was NOT reprinted in the Archives.