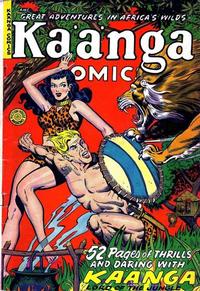 The Return of the Lion-Men! (Table of Contents: 2)

The Panther Lord! (Table of Contents: 3)

Originally pencil credit to Tom Cataldo, but the original story in Jungle Comics #68 is signed Rubi Moore on the first page, which has a quite different first panel. A page between 4 and 5 has been removed, and one between 7 and 8. The last panel on page 8 has been altered by removing Ann in the foreground. Panel 5 on page 9 has a new figure of Ann, and on the last page, panels 3 and 4 has entirely new drawings, not by Moreira.

King of the Congo Beasts (Table of Contents: 4)

Anthony Durrant notes (2/7/2007) that this reprint has entirely new dialogue vs the original version.