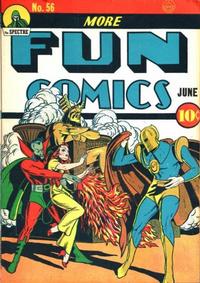 Genre
superhero
Characters
The Spectre [Jim Corrigan]; Bentley (villain, intro)
Synopsis
Bentley of Bentley Wholesalers threatens individuals who refuse to do business with him, so the Ghostly Guardian decides to investigate and bring the felon to justice.
Reprints

First Line of Dialogue or Text
Captain Desmo and Gabby are at it again with the treacherous fanatics - the 'Society of Assassins'...
Genre
adventure
Characters
Captain Desmo; Gabby; the Grand Assassin (villain)

The Spy (Table of Contents: 9)

First Line of Dialogue or Text
Aboard the 662, en route back to the United States from the Canal Zone...
Genre
war
Characters
Lt. Bob Neal; Tubby
Synopsis
Bob and Tubby are assigned to gather a huge oil tanker bound for a "neutral" port.

This is the first appearance of Congo Bill.

The Jade Hatchet (Table of Contents: 18)

Genre
superhero
Characters
Dr. Fate [Kent Nelson]; Wotan (villain); Inza Kramer
Synopsis
Taking Inza with him to the region of the Styx, Dr. Fate is seeking Wotan, but is informed he is still alive and threatening to blow up the world!
Reprints

Dr. Fate has no gloves. Synopsis added by Craig Delich.