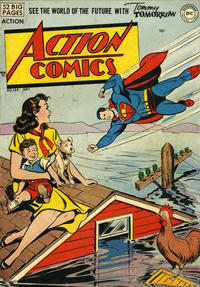 Genre
superhero
Characters
Superman [Clark Kent]; Perry White; Lois Lane
Synopsis
Flashback story shows how Clark Kent came to Metropolis and got his job at the Daily Planet. Clark first met Perry in Smallville, but Perry doesn't seem to remember him, so he tries to get a job as a policeman instead. He also tries to sell vaccuum cleaners.

Cross over with this month's Adventure Comics, #152.

The Poison Planet! (Table of Contents: 5)

This story is not in Otto Binder's records as as shown in Alter Ego 147.

First Line of Dialogue or Text
And with the costume I got for us, Jerry, we should be a cinch for first prize
Genre
humor
Reprints

First Line of Dialogue or Text
If I don't reduce a little...
Genre
humor
Reprints

Genre
non-fiction
Synopsis
How chewing gum and bubble gum are made.

First Line of Dialogue or Text
Golly, it's muddy out after the rain!
Genre
humor
Reprints

First Line of Dialogue or Text
Boy - look at all these snowballs!
Genre
humor; children
Reprints