Dating is an estimate from www.ausreprints.com.

[Ways of the Mighty West] (Table of Contents) 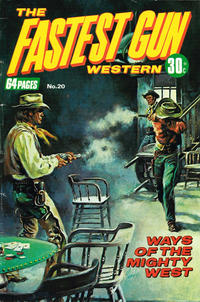 This is probably episode 53 of this series.

The Long Shot (Table of Contents: 2)

A Man Returns to Greenwood (Table of Contents: 3)

The artist's signature is dated '63. Other printings of this story include Ringo (K. G. Murray, 1967 series) #11, March 1970 [A Man Returns to Greenwood]; Cowboy (Ursus, 1972 series) #1, January 1971 [Un hombre regresa a Greenwood]; and The Fastest Gun Western (Federal, 1984 series) #nn, 1984? [The Day He Came Back to Greenwood]. It is unlikely that the Australian printing in Ringo #11 is the original version. This is a different translation to the later version titled "The Day He Came Back to Greenwood".

This version of the story has been retitled and is probably from The Rider (Ajax; Farrell, 1957 series) #?, although the lead character is referred to as the "Lone Rider" in the story.

The Condemned (Table of Contents: 5)