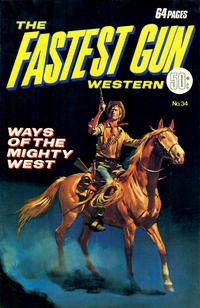 The Annihilator (Table of Contents: 1)

Job Number
[B-1897]
Genre
western-frontier
Characters
William Bonney [Billy the Kid]; Fergus Queel; Mathilda
Synopsis
Billy the Kid is sick, but his battle with Queel has left so much damage that the citizens of Tuckno won't help him.
Reprints

The Adventures of Red Eagle (Table of Contents: 4)

Genre
western-frontier
Characters
Juan Mestizo [John]; Archimedes;
Synopsis
Juan is attacked by a Lynx and dragged away by the strong current of the Colorado River. Archimedes searches and concludes Juan is dead. A wounded Juan is captured by a soldier who has stole the army pay. He forces Juan at gunpoint to help him, but Juan leaves a sign for the Indian guiding the pursuing patrol. At night, the deserter ties up Juan and is attacked by a rattlesnake. Juan cannot get free to help and the thief is dead by the time the patrol arrives. Juan travels with the group travels to Fort Powell, where he is reunited with Archimedes.
Reprints

"© S.I. Artists". This feature includes is two seven-page episodes merged together. Page eight recaps what has occurred on the previous pages and has space where a story title and logo have probably been removed.

Buffalo Bill: The Man Who Brought the West to the World (Table of Contents: 6)

The Stolen Horse (Table of Contents: 7)

Job Number
[A-4351]
Genre
western-frontier
Synopsis
After Moose Hartley's gang rob the bank, they need a horse and steal Kid Montana's. With the Sheriff's help, Montana finds the gang in next town. He will not stop until he takes them down for stealing his horse—and for the reward.
Reprints