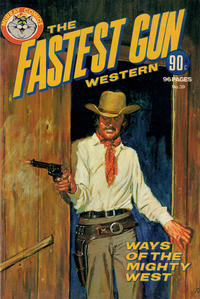 Job Number
[S-492]
Genre
western-frontier
Characters
Daniel Boone; lieutenant; colonel; indians
Synopsis
During the French–Indian war in 1759, Daniel Boone prevents the murder of an Indian and finds himself a prisoner of the British as a traitor. As an ally of the Indians, he discovers information about an impending attack.
Reprints

Job Number
A-4845
Genre
western-frontier
Characters
Black Furty; Silvertip bear; Vince Wollman
Synopsis
A mare strays too close to a bear's cave and Black Fury must defend her against the Silvertip, but Black Fury is willing to defend the bear when humans arrive to kill it.
Reprints

Job Number
VI
Genre
western-frontier
Characters
Vandalia West; Shep; Farrell; Cubine; Rufus Buck; McCoy; pa; Sam
Synopsis
Vandalia is in a prison for playing poker in Tacoma. On the day of her release, other prisoners violently break out of the jail. Vandalia decides to pursue them and ultimately only one is left alive--a man whose mad dreams of subterranean monsters lead him to violent murder.
Reprints

Death Was Waiting (Table of Contents: 7)

Job Number
[D-2932]
First Line of Dialogue or Text
...I had ridden through the newly opened western territory many a time...
Genre
western-frontier
Characters
Geronimo Jones; Sara
Synopsis
Geronimo returns to Virginia and a small sea port village, which is deserted. He finds one young woman who tells him the entire town has been raided and taken into slavery by pirates.
Reprints

First Line of Dialogue or Text
Darn it, Frank. I knew we were on the wrong road!
Genre
western-frontier
Characters
Annie Oakley; Frank Butler; Bull Black;
Synopsis
Annie and Frank arrive in Dry Gulch just as Bull Black's gang is about to raid the bank. Her precise shooting of a lock frees the townsfolk to reclaim their town from the gang.
Reprints

Lady in Distress! (Table of Contents: 10)