The indicia for this issue has an incorrect date of May 2011, the cover has the correct month (June).
This issue has variants: 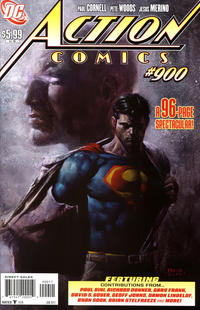 The Black Ring Finale Reign of Doomsday (Table of Contents: 1)

Story continued from the previous issue and from Superboy (DC, 2010 series) #6, and continues in the next issue. "Very special thanks to Neil Gaiman."

The credits for the specific pages weren't indicated in the book itself, but Pete Woods and Jamal Igle have both confirmed the pages that they did with this indexer.

A Celebration of 900 Issues of Action Comics (Table of Contents: 2)

This is a table of contents (with credits) for the remaining stories in this issue. The background is from the Adam Hughes variant cover for this issue.

Genre
superhero
Characters
Jor-El; brilliant scientist; Kal-El (cameo)
Synopsis
Jor-El asks a brilliant scientist to design a life support system for a small rocket in three days. The scientist realizes the ramifications for his own family, and asks for one night before he starts.
Reprints

Friday Night in the 21st Century (Table of Contents: 5)

The Incident (Table of Contents: 6)

This story generated a lot of controversy, as Superman had earlier (and following this issue) stood for "Truth, Justice, and the American Way," but here Superman says that '"Truth, Justice and the American Way"-- it's not enough anymore.' The day after the issue went on sale, DC Comics co-publishers Jim Lee and Dan Didio issued a statement printed in the New York Post that said "Superman is a visitor from a distant planet who has long embraced American values. As a character and an icon, he embodies the best of the American Way." And the author chimed in on July 19th in an interview with Entertainment Weekly and said "It was also interesting to me that people thought it was a slight against America. It wasn’t meant to be that at all. He was actually trying to protect America from what he intended to do." And then in editor Matt Idelson's semi-regular question and answer session at SupermanHomePage.com in August, he was asked for his personal feelings on the story, and responded among other things that "Had I done a better job of making clear to the readers that the stories in the back may or may not fit into continuity, and are simply a celebration of the character from a diverse set of writers and artists, perhaps things wouldn't have been so loud." The notoriety probably was the cause of the issue selling out two days after it was put on sale.

Camp David is captioned as being in Frederick, Maryland, when the closest town to it is really Thurmont, Maryland.

Only Human (Table of Contents: 7)

Genre
superhero
Characters
Superman [Clark Kent]; Lois Lane; Cliff Carter; Jimmy Olsen (cameo)
Synopsis
Former football star Cliff Carter is now a spokesman for SuperTech, and demonstrates his company's new SuperSuit. He challenges Superman to a race. That night they meet and start the race, but the SuperSuit siphons too much energy from around it, and Superman has to shut it down.

This story is told in a movie storyboard format, with black and white art on the left side, and text as if from a screenplay on the right, with alternating red and blue background colors to denote which text goes with which picture.

The Evolution of the Man of Tomorrow (Table of Contents: 8)

This is an illustration that has six figures of Clark Kent changing to Superman. Each of the figures is done in a style from past artists of Superman: Joe Shuster, Curt Swan, John Byrne, Jerry Ordway, Jim Lee, and Gary Frank. The buildings in the static background also change time periods from left to right.

Letters from Oliver Ortiz and Christopher Kaufman. This includes a farewell to artist Pete Woods, and a promo for the next issue including the cover.