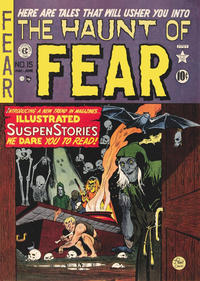 The Wall: A Psychological Study (Table of Contents: 1)

Genre
horror-suspense
Characters
Clara Harper (Neal's wife, death); Neal Harper (villain); Snooky (a cat)
Synopsis
Clara is always harping to Neal about tending to the cat's needs, even if they supercede those of him as her husband. When Neal accidently kills Clara instead of Snooky, he decides to wall up his wife's body in the cellar. Unfortunately, Neal's conscience and the cat gets the best of him!
Reprints

A story similar to Edgar Allan Poe's The Black Cat with a few themes from "The Tell-Tale Heart", "The Black Cat" and "The Cask of Amontillado" mixed in.

House of Horror (Table of Contents: 2)

Genre
horror-suspense
Characters
Les Wilton; Henderson (death?); Waters (death?); Arling (death?)
Synopsis
Three college freshmen plegees disappear one night as part of the Gamma Delta Fraternity hazing at a local haunted house, the Palmer Place. Les Wilton goes in after them, but when he doesn't make a re-appearance, people going into the home looking for him find him: having aged fifty years!
Reprints

The EC Archives: The Haunt of Fear, Volume 1 (2011) lists the writer as Ivan Klapper.

Klapper also wrote a few early stories in The Vault of Horror and Tales From the Crypt, as well as some of the early one page text features. He later became a consultant for the 1959-1961 ABC-TV paranormal TV drama, "One Step Beyond".

The story appears to have drawn its inspiration from a fraternity initiation anecdote from Bennett Cerf's "Try and Stop Me", also a favorite source of plot inspiration for Bill Gaines.

Kurtzman recounts that it was this story that got him the EX account.

Out of the Grave (Table of Contents: 3)

Genre
horror-suspense
Characters
Marie; The Thing [Jim] (the walking dead); unnamed man (villain, death)
Synopsis
Having already killed her friend Jim and buried him, the un-named man tied Marie to the chair and set the cabin on fire, all to get her inheritance. But Jim was not content to allow the girl he once cared for and promised to protect die in the fire, so he rose from the grave to exact his revenge on her tormentor!
Reprints

Adapted in Tales From the Crypt reprints as full 8 page story sequence re-titled as "The Thing From the Grave".

The Mad Magician (Table of Contents: 4)

Genre
horror-suspense
Characters
Jim Crane (reporter); Alice Crane (Jim's wife); Czar (Boris' dog); Caesar (Boris' dog); Boris Petaja (villain, magician, death)
Synopsis
Skilled in the tricks of ancient and modern magic, a mad magician decides to perform the ultimate trick of all time: to saw a man in half and then put him back together again. What he doesn't know is that a trick of fate will turn the tables on the magaician.
Reprints

The Thing in the Swamp! (Table of Contents: 5)

Genre
horror-suspense
Characters
Sam (death?); unnamed partner of Sam (death?); Robert Colby (Marie's fiancee); Professor Carl Ward (scientist, death); Marie Ward (Ward's daughter, death)
Synopsis
Two men are making their way through the Okefenokee Swamp when an old man warns them not to continue on. When questioned, the man recounts the story of three people, two of them scientists, who came to the swamp to conduct an experiment, which they felt failed. When the mixture they made was thrown into the swamp, a strange blob-like creature was born, which killed the scientist and his daughter. The old man warns them of extreme danger if they continue, and the fact that the old man was the fiancee of the scientist's daughter doesn't sway them one bit!
Reprints

Splash page and last panel altered to The Old Witch in Vault of Horror reprints, although character was still in green robe like the Vault-Keeper. The Old Witch usually had a red robe.