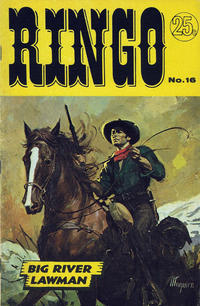 Queen of the Desert (Table of Contents: 1)

This artwork does not look like any of the usual Ringo/Gringo artists. This story's Spanish title is "La reina del desierto".

Gold in Tascosa (Table of Contents: 2)

The lettering used on this story matches contemporary translations of Selecciones Ilustradas work. The last page of the story appears to have been reduced and combined from two pages originally.

A Tranquil Town (Table of Contents: 4)

Genre
western-frontier
Synopsis
Conflict is brewing in Thyran, the most tranquil town in the southeast. At a protest rally, Bernadette's brother is shot by police in the pockets of the bosses, Mayer, Nelson and the Judge. Ringo rescues Bernadette from being tortured by the corrupt Sherriff's men and helps her lead the coup to reclaim the town.
Reprints

The signature on this story is dated '70. It is possible there is an earlier printing, but this is the earliest identified so far.