http://coa.inducks.org/issue.php?c=us/US++403 Some credits at this link are incorrect. See notes for "The Pelican Thief".
This issue has variants:

The Pelican Thief (Table of Contents) 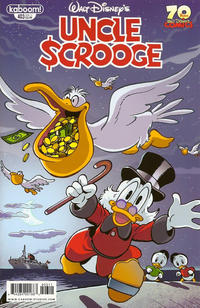 [Credits and indicia] (Table of Contents: 1)

Story titles and creator credits for the issue. Credits are incomplete.

The Pelican Thief (Table of Contents: 2)

All credits relating to translation / American English dialogue script for “The Pelican Thief” were omitted from this issue’s credits page. They are added/corrected as part of this index. Each individual story’s coloring credits were also omitted.

The story’s title, and all incidental character names (as well as their various aliases) were the product of the uncredited translation / American English dialogue provider, under the supervision of the individual credited here as the de facto translation and dialogue editor.

The lone exception to this is “J. Edgar Rover” = J. Edgar Hoover, the first director of the US Federal Bureau of Investigation (FBI), which was a nod to prolific Disney comic book writer Vic Lockman, who used the name in The Beagle Boys (Western, 1964 series) #7 August 1967.

In the original version of this story, the character known as “The Identity Thief” had a nondescript name, and was just a villain who used disguises. The concept of making him “The Identity Thief” – a villain with so many creative aliases that he no longer remembers who he once was – as well his many and various named-aliases, was also the product of the translator / American English dialogue provider.

Job Number
D 2007-240
First Line of Dialogue or Text
Wak! An ad flier for rabbit hunting in Whitehorse... in the Klondike! A town I put on the map practically all by myself!
Genre
anthropomorphic-funny animals; humor
Characters
Uncle Scrooge; Miss Quackfaster; various citizens of Whitehorse; bear
Synopsis
Scrooge returns to Whitehorse in an effort to recapture his youth, only to find everything's gone "soft 'n' civilized" - even the bears.
Reprints
Keywords
bear; civilization; disappointment; feeling old; gold rush; Whitehorse