Entire issue except story inside back cover reprinted as Whiz Comics (Derby, 1950 series) #122. 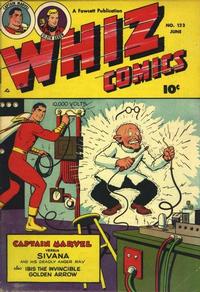 Captain Marvel and the Anger Ray! (Table of Contents: 1)

Genre
superhero
Characters
Captain Marvel [Billy Batson]; Dr. Sivana
Synopsis
Dr. Sivana invents a ray that makes people angry, and Captain Marvel is scared that he will get shot with it and destroy the city.
Reprints

Ghost of a Chance (Table of Contents: 4)

Script credit suggested by Jerry Bails' Who's Who.

Art looks like Kurt Schaffenberger, but stiffer than the Captain Marvel story in this issue.

The Tribal Traitors (Table of Contents: 8)

Genre
western-frontier
Characters
Golden Arrow
Synopsis
Two braves try to take over the Wowon Indian tribe, but Golden Arrow teams up with the chief to beat them.
Reprints

Genre
humor; western-frontier
Synopsis
One cowboy throws a clock at the other.
Reprints