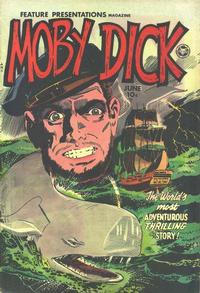 Inside front cover. Bottom-right section features the signature “Harper,” which presumably belongs to the Harper Johnson credited to have done the art in Jerry Bails’ Who’s Who.

Adapted from MOBY DICK by Herman Melville. Art is consistent with the signed illustration on the inside front cover.

Mystery of the Murdered Sea Captain (Table of Contents: 3)

That Wreck, the Hesperus! (Table of Contents: 4)