The Monsters From the Ice! (Table of Contents) 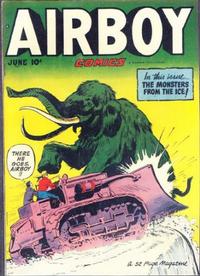 This is the 3rd appearance of Zzed. Story continued from last issue. Writer credit by Roy Thomas.

The Battle of New York (Table of Contents: 3)

From Bats to Oars (Table of Contents: 4)

The Heart of a Race Horse (Table of Contents: 5)

And It's a Fact / comic story / 1 page (report information)

Genre
horror-suspense
Characters
The Heap [Baron Eric von Emmelman] (origin re-told with details); Baron von Emmelman (flashback); un-named fisherman
Synopsis
While relaxing from war activities, Baron von Emmelman, while studying Egyptian papers, discovers that the Secret Essence of Life did exist, and could be found in two containers buried under each paw of the Sphinx. But the Baron is shot down before he can make it to Egypt. Years later, the Heap returns to the swamp in which he died and discovers the wreckage of his plane, but also the paper revealing the Secret Essence. He begins the journey, stopping to save a fisherman's life, who then gets a boat for the Heap to cross over to Africa.
Reprints

The story continues in the next issue. Writer credit by Roy Thomas.