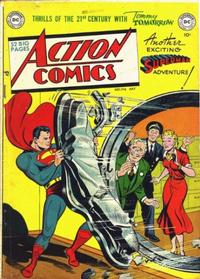 The Statues That Came to Life! (Table of Contents: 2)

Thundering Out of America's Most Danger-Filled Days... (Table of Contents: 4) (Expand) /

The Impossible Worlds! (Table of Contents: 5)

Previously credited to Otto Binder, but it's not in his records as printed in Alter Ego 147.

After the Atom Spies (Table of Contents: 6) (Expand) /

First Line of Dialogue or Text
A rancher in Nebraska has a pet cheetah...
Genre
non-fiction

Out of the Gag-Bag / comic story / 0.5 page (report information)

We formerly credited the art to Phil Berube in error.

The Galleon in the Desert! (Table of Contents: 17)

Reunion at the Rustlers (Table of Contents: 18) (Expand) /

First Line of Dialogue or Text
This is a swell shortcut, we kids found, to get to our ball field!
Genre
humor