This is the second “Pirate Gold” related cover drawn by Daan Jippes, with Donald, his nephews, and Yellow Beak the parrot. The first was for Donald Duck (Gladstone, 1986 Series) #250 February 1986, illustrating a reprint of the original 1942 story “Donald Duck Finds Pirate Gold” by Carl Barks and Jack Hannah. 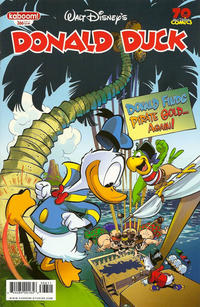 First Line of Dialogue or Text
Nice night for a thriller! How ‘bout “The Monster That Ate the Other Monster”?
Genre
anthropomorphic-funny animals; humor
Characters
Donald Duck; Huey; Dewey; Louie; Uncle Scrooge; Yellow Beak; Beagle Boys; Beagles International
Synopsis
Many years after the first “Pirate Gold” adventure, the parrot Yellow Beak shows up on Donald Duck’s doorstep with a new treasure map, leading to a new “Pirate Gold” adventure. Only this time, Uncle Scrooge is in for a piece of the action… and the Beagle Boys want all the “action” for themselves.
Reprints
Keywords
parrot; pirates; sea or island setting; ships; storm; treasure

This story is a sequel to the original 1942 story “Donald Duck Finds Pirate Gold” by Carl Barks and Jack Hannah, from Four Color (Dell, 1942 Series) #9 October 1942 – and its many international reprints. The character of Yellow Beak transcended the “Pirate Gold” tale of Barks and Hannah (adapted from an unproduced Walt Disney Studio cartoon), having similar treasure hunting adventures with such characters as The Seven Dwarfs, Peter Pan, and even Walter Lantz’s Woody Woodpecker. Page four, panel four gives an oblique nod to those “non-duck-continuity” stories, when Yellow Beak names some of his former shipmates as “Young Peter”, “Sharp Woodward”, and “The Seagoin’ Seven”.