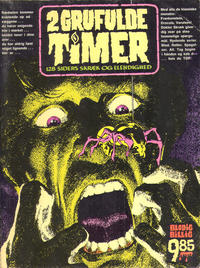 Uses cover from "House of Mystery #195" as illustration

Job Number
J-1330
Genre
horror-suspense
Characters
Abel (host)
Synopsis
Dan Walker washes ashore a tropical island filled with people he thinks look like freaks. He successfully escapes, but not without a significant change to his own appearance.
Reprints

An executioner swings his axe and the blade flies into the air.

Seems like page 2 has been edited by adding extra sky.

Letter column in Omega Men #24 states that this is a prototype version of the Psions, created by Marv Wolfman, that were an integral part of the Omega Men series.

The names of the two aliens, Spafon and Squatront, are also the names of two famous EC fanzines.