Spider-Man No More! (Table of Contents) 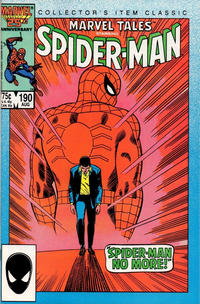 Spider-Man No More! (Table of Contents: 1)

Genre
superhero
Characters
Spider-Man [also appears as Peter Parker] (origin recap); Aunt May Parker; Anna May Watson; Harry Osborn; Professor Miles Warren; Gwen Stacy; J. Jonah Jameson; Betty Brant; Mary Jane Watson; Frederick Foswell (villain); Kingpin (villain); The Mob (villain); Johnny Carson (cameo); Ed McMahon (cameo); Uncle Ben Parker (cameo flashback); The Burglar (cameo flashback)
Synopsis
Fearing for his aunt's health and tired of being hounded by Jameson, Peter gives up being Spider-Man and concentrates on being a simple college student. A kid finds the discarded Spidey suit in the trash can and brings it to the Daily Bugle where Jonah proudly puts it on display. Pete's personal life starts looking up but crime increases as the Kingpin gathers the mob under his leadership. Feeling guilty about the crime wave, Peter remembers the lessons taught to him by his uncle's death and decides to become Spider-Man once again.
Reprints

Mike Esposito's alias Mickey Demeo was misspelled as Dimeo in this issue.

Post Office of the Past / letters page / 1 page (report information)

Owsley talks about the next issue's story, reprinting The Amazing Spider-Man (Marvel, 1962 series) #97, Stan Lee's anti-drug story which was not approved by the Comics Code Authority,

Letters from Robert Lax and Janet Schreiber are reprinted from The Amazing Spider-Man #53.