Reign of the Doomsdays (Table of Contents)

The signature is partially obscured by the title at the bottom (it's more readable on the solicitation cover). The cover also contains a promo at the top for the Green Lantern movie, in theaters June 17th. 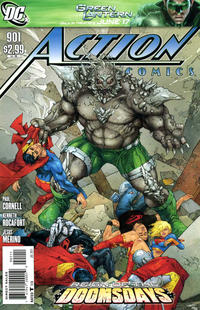 Reign of the Doomsdays Part 1 (Table of Contents: 1)

Story continued from the previous issue and continues in the next issue. President Obama is not named in the story, but publicity surrounding the issue from DC did specifically name him.