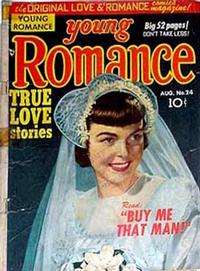 Genre
romance
Characters
Jeff Sloane; Elizabeth "Liza" Hudson; Malcolm Hudson; Tom Harrow; Barrow
Synopsis
Heiress Liza considers herself “a timid, unattractive misfit” but falls in love with Jeff. Her father suspects Jeff is a fortune hunter, and Liza eventually comes to believe the same thing. Jeff breaks up with her. Liza apologizes to him but he says she should “go home and start living.” She decides to travel to Europe, and her father puts her on a private plane where Jeff happens to be the only other passenger. They reconcile.

Genre
romance
Characters
Nicky Berra; Swede Carlson; Rock Berra; Len Silvers
Synopsis
Nicky works with her father Rock in the produce business. They buy a truckload of prize peaches from Swede at a fair price, but Rock’s men later waylay Swede and beat him up. However, Nicky saves his money. She nurses him back to health. When Rock and his men attack Swede in hopes of locating the peach orchard, Nicky holds them off at gunpoint. She and Swede drive off together.

Genre
romance
Characters
Nancy Hale; Kitty Rhodes; Allen Searle; Eric
Synopsis
Kitty is attracted to Allen, but when she discovers he’s just a shoe salesman and thus not in her social class, she avoids him. Later, learning Allen has graduated from law school, Kitty asks Nancy Hale for advice. Nancy says Kitty has to “face him frankly and honestly”--Kitty makes up with Allen.

The Little Things Remind Him of You (Table of Contents: 5)

Genre
romance
Synopsis
"Use a bit of psychology to trap him!" (How to catch a man)

Can Others See Through You? (Table of Contents: 6)

Genre
romance
Synopsis
"Six suggestions on how to make him fall!" (Hints for women to catch a husband)

Take a Chance! (Table of Contents: 8)

Genre
romance
Characters
Jack Muldoon; Charles Coleburn; Dinty; Denise O'Brien; Mrs. O'Brien
Synopsis
Denise dates her stuffy boss Charles, but then falls in love with midget-car racer Jack. Her mother convinces her to ask Jack to give up racing as proof of his love, and Charles offers him an office job, but Jack refuses. Denise accepts a marriage proposal from Charles instead. However, she breaks up with Charles and goes to watch Jack race. She realizes she loves him, regardless of the risks.

Same story premise as "Afraid to Love" in Youthful Love Romances (Pix-Parade, 1949 series) 2 (October 1949) and "I Fell in Love with a Mama's Boy" in First Love Illustrated (Harvey, 1949 series) 4 (August 1949). All three of these stories deal with a woman who falls in love with a race-car driver and asks him to quit his profession. In all three stories the woman is dating her supervisor at work, who (in all three stories) makes a point of her not calling him by his first name while on the job.

About Your Face (Table of Contents: 9)

Genre
romance
Characters
Dana Lanson; Vera Chanin; Mrs. Craine; Phillip Halliday; Dale Denton
Synopsis
Artist Dana meets Vera on VJ Day and later tracks her down at her job as a governess. They are married. His art career falters and Vera gets a job to help support them. Dana is hired by sophisticated Dale to paint her portrait and they fall in love. Vera finds out and leaves him, but after Dana paints a portrait of her to prove his love, they are reunited.
Keywords
VJ Day; World War II

The beginning of this story was obviously inspired by the celebrations in the USA on 14 August 1945, marking the surrender of Japan in World War II. This led to the famous Alfred Eisenstaedt photograph of a U.S. Navy sailor kissing a woman on the street in Times Square, New York.