First Line of Dialogue or Text
Could the Falcon save this girl from the death machine?
Genre
superhero
Characters
The Falcon [Carl Burgess]
Reprints 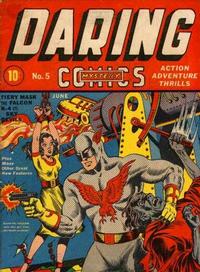 The Jelly of Doom (Table of Contents: 2)

[The Devil-Flower] (Table of Contents: 3)

[Strike Against the Nazis] (Table of Contents: 4)

Genre
aviation
Characters
K-4; Sky Devils [René D'Auvergne; Ronald Wolverstone-Clodd]
Synopsis
When the Sky Devils get captured on a photographing mission, they soon escape and are rescued from their pursuers by K-4.
Reprints

The GCD had Maurice Gutwirth (pencils) and Jack Alderman? (inks) for this. Dr. Michael Vassallo tentatively credits Jack Binder (pencils) speculated that E.C. Stoner might have contributed inks on account of having inked Binder elsewhere, but Ron Goulart says that he sees no E.C. Stoner in the art at all. He does agree that Binder was involved. All of this discussion is from the Timely-Atlas list.

[The Origin of Monako] (Table of Contents: 5)

[Battle of the Robots] (Table of Contents: 6)

Last golden age appearance. There is a teaser panel for a Marvex story in the next issue but the story did not appear. Next appearance in All Select Comics 70th Anniversary Special (Marvel, 2009 series) #1.

[Planet of Black-Light] (Table of Contents: 7)

Last appearance. A teaser at the bottom of the last panel promises another episode "next month" but it never appeared.

The Death Clutch (Table of Contents: 8)

Genre
adventure
Characters
Bob Johnson; Sergeant Elliot; Jack Mardel's uncle (death); Jack Mardel (villain)
Synopsis
Jack Mardel has a large inheritance coming to him from his elderly uncle, but he decides not to let nature takes its natural course before he gets it!
Reprints

Rebuilding the World (Table of Contents: 9)

Last appearance. A teaser promises another installment in the next issue but there was no such story.

Genre
adventure
Characters
Little Hercules (introduction, origin); Two spies (villains, introduction)
Synopsis
Hercules is made a doctor of all sciences at age 12 and decides to take his newly invented explosive to his government while evading two foreign agents who are trying to steal it from him.
Reprints

In his introduction to the Masterworks, Will Murray observes that close examination of the splash panel reveals that a different logo was originally in place, that used more letters. Murray goes on to assert that the Falcon is a reworked version of the Purple Mask. While he does not comment on the costuming, it is worth noting that the Falcon's outfit in this story is different than on the cover and in his other two appearances, and indeed appears to be a re-colored version of the Purple Mask's outfit, with a chest logo added along with wings over his ears. The Falcon's general setup and civilian employment are identical to that of the Purple Mask.