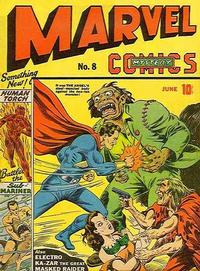 The Human Torch and the Sub-Mariner Meet (Table of Contents: 1)

Genre
superhero
Characters
Sub-Mariner [Prince Namor]; Human Torch [Jim Hammond]
Synopsis
Namor looks for new ways to avenge himself on the mankind that attempted to electrocute him, but the Torch shows up and drives him away for the time-being.
Reprints

Part 1 of the Torch/Namor battle, continued in Human Torch story in this issue.

[The Search for Sub-Mariner] (Table of Contents: 2)

Genre
superhero
Characters
The Human Torch [Jim Hammond]; GS: Sub-Mariner [Prince Namor]; Betty Dean; un-named Police Chief; Jeff (Policeman); Frank (Policeman)
Synopsis
Embittered because the police chief believes Torch to be yellow because he failed to bring in the Sub-Mariner, the Torch races off to repair some of the damage Namor caused. He meets Betty and together they head for the Empire State Building where the Prince has been spotted and once again drives Namor away.
Reprints

Part 2 of the Namor/Torch battle, which is continued next issue, as the last 1/3 of the page announces in illustrated form. Lettering credit added by Craig Delich 2008-11-15.

[The Captive in the Cabin] (Table of Contents: 3)

[The Boomeranged Hold-Up] (Table of Contents: 4)

Genre
western-frontier
Characters
The Masked Raider [Jim Gardley]; Mexican Pete (introduction); un-named Sheriff; un-named bank president (villain); Brady and his gang (villains, introduction for all)
Synopsis
The Raider runs into Mexican Pete, who has attempted to trail the thieves who just robbed a local bank and made off with the savings of the small ranchers. But the Raider smells a rat and that rat is the president of the robbed bank.
Reprints

Genre
adventure
Characters
Steve Burnett; Jim (villain); Sandy (villain)
Synopsis
Steve runs across a cabin inhabited by two train robbers, but is rendered unconscious. When he awakes, he must discover why they have come to this shack in Silver Mountain and tied him to a cot when there is no silver left in that area.
Reprints

The last part of page two features the "Marvel Comics Contest Winners, February 1940 issue No. 4". The 1st prize of $5 went to Kris Dalman and the 2nd prize of $2 went to Frank Salvaldare Quarttrocchi. An additional 18 winners of $1 each were also listed (information listed added by Craig Delich 2008-11-15]; credit for Sam Gilman by Dr. Michael Vassallo through the GCD newsgroup, November 2007. Original credit said "? [as J.G.]"(R. Schenk).

[The Crook Who Controlled Electro] (Table of Contents: 6)

Genre
superhero
Characters
Electro; Professor Zog; District Attorney Rupert Haden; Villains: "Boss" Sarpo (villain); Scar-Face Joe (villain, introduction), Jago and his Dragon-Men of Ligra (villains, introduction for all)
Synopsis
True to his word, "Boss" Sarpo escapes from prison, and with the help of "Scar-Face" Joe and his gang, kidnaps Professor Zog, killing his guards, kidnapping the district attorney, and using Electro to begin a series of thefts. Unfortunately for Sarpo and Joe, Jago and his Dragon-Men also see the value of Electro and come to Earth to kidnap the professor and seize the robot for their own evil intentions on their own world.
Reprints

Genre
detective-mystery
Characters
Ferret; un-named commissioner; Blackie Giles (villain, introduction)
Synopsis
Ferret arrives at his bank to make a deposit just as it is being robbed, but he uses an unusual strategy, with himself as bait, to round up the crooks.
Reprints