[Spouting-off at Scrooge] (Table of Contents)

Donald Duck does not appear on this cover. 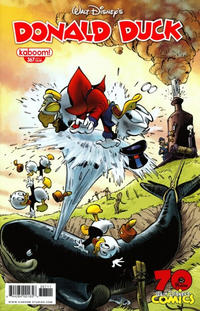 Whale of a Good Deed (Table of Contents: 1)

Whale of a Good Deed (Table of Contents: 2)

First Line of Dialogue or Text
Huey, Dewey, and Louie were saving the whales long before it became a cause! Duckburg will always remember Tidal Wave Pluvius…
Genre
anthropomorphic-funny animals
Characters
Donald Duck (cameo); Daisy Duck (cameo); Uncle Scrooge; Huey; Dewey; Louie; various other Junior Woodchucks; Littlest Chickadees; Sandy McCinder; The Great T.O.P. B.R.A.S.S. (Woodchuck leader)
Synopsis
In the wake of a massive tidal wave, Uncle Scrooge and the Junior Woodchucks clash over the fate of a beached whale, deposited by the tidal wave into a muddy ditch. The Woodchucks are out to free the whale and return it to the sea, while Scrooge intends to “render this mammal into countless barrels of whale oil”.
Reprints
Keywords
boiler; ditch; environmental awareness; flood; steam; tidal wave; tug-of-war; whale; working-at-cross-purposes

The story is redrawn after the Carl Barks scenario from Huey, Dewey and Louie Junior Woodchucks (Western, 1966 series) #7 (October 1970). Pages and panels are reconfigured from the original version drawn by John Carey – the original was 17 pages, and this version (by condensing panels) comes to 14 pages. The first line (caption box) has been expanded to read: “Huey, Dewey, and Louie were saving the whales long before it became a cause! Duckburg will always remember Tidal Wave Pluvius…”, when the original only read: “Duckburg will always remember Tidal Wave Pluvius…”. Donald Duck appears in only one panel of this lead story in his own title because this Junior Woodchucks story was intended for a future issue of Uncle Scrooge (thus the cover – and story – without Donald), but was forced into the last Boom! issue of Donald Duck instead. No colorist is credited for this story. Carl Barks’ original published script called the unfortunate beached whale “Muddy Dick” (presumably a melding of “Moby Dick” and the whale being stuck in the mud), while this version renames the whale as “Muddy Mick”.

Tree's a Crowd (Table of Contents: 3)

First Line of Dialogue or Text
How cozy and genteel I feel when I start the day with tea and crumpets in the garden!
Feature Logo

No colorist is credited for this story.