Fireworks are added to the top of this cover, that were not in the original Italian printing. 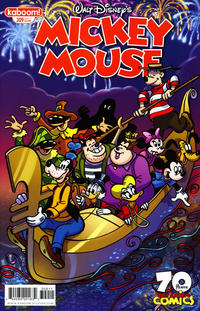 The Treasure of Marco Topo Part One (Table of Contents: 1)

The Treasure of Marco Topo Part One (Table of Contents: 2)

Concludes in Walt Disney's Comics & Stories (Boom! Studios, 2009 Series) #720 (June 2011). The name of Mickey’s Italian ancestor “Marco Topo” is derived from “Topolino”, the Italian name for Mickey Mouse. From that, and the similar-sounding names “Marco Topo” and “Marco Polo”, came the American English title for this story – “The Treasure of Marco Topo”, similarly derived from the classic story “The Treasure of Marco Polo” by Carl Barks in Uncle Scrooge (Western, 1963 Series) #64 (July 1966).