Original cover by Casty for this issue. 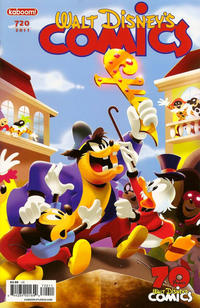 The Treasure of Marco Topo Part Two (Table of Contents: 1)

The Treasure of Marco Topo Part Two (Table of Contents: 2)

Concludes from Mickey Mouse (Boom! Studios, 2011 Series) #309 (June 2011). The name of Mickey’s Italian ancestor “Marco Topo” is derived from “Topolino”, the Italian name for Mickey Mouse. From that, and the similar-sounding names “Marco Topo” and “Marco Polo”, came the American English title for this story – “The Treasure of Marco Topo”, similarly derived from the classic story “The Treasure of Marco Polo” by Carl Barks in Uncle Scrooge (Western, 1963 Series) #64 (July 1966).

Of Mice and Manners (Table of Contents: 3)

First Line of Dialogue or Text
Of all things for Minnie t' give a feller ---- a book of etiquette!
Genre
anthropomorphic-funny animals; humor
Characters
Mickey Mouse; Pluto; Minnie Mouse
Synopsis
Mickey practices his etiquette on Pluto in order to impress Minnie but accidently slams a door in her face, undoing his well-intentioned work.
Reprints
Keywords
best of intentions; etiquette; you can’t win

This Sunday strip is formatted over 2 pages, with an unrelated Gottfredson illustration of Mickey riding atop a toy train occupying the bottom tier of page 2.