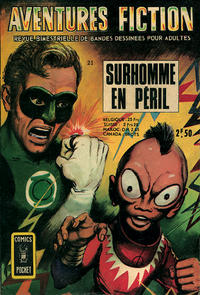 Genre
science-fiction (science fiction)
Characters
Kraggoom; Derek Wolfington
Synopsis
An exiled gaseous alien criminal named Kraggoom waits in Earth orbit for the first human astronaut in order to enter his body and possess his mind, returning to Earth as a conqueror. However, the first astronaut turns out to be a wealthy cheat who paid a safecracker to obtain the test results from NASA's selection process and altered them so that he would be chosen as the first astronaut. He is unable to cope with space travel and develops amnesia under the stress. Kraggoom, trapped in the human's mind, suffers the same fate as the spacecraft returns to Earth.
Reprints

Genre
horreur-suspense (horror-suspense)
Characters
Lucy Scott; Aaron
Synopsis
A stranger appears at a gas station and asks for a job. He has mysterious powers, and is eventually attacked by supernatural beings. They agree to leave him alone, but only if he gives up his powers.
Reprints