Credits based in part on Jerry Bails' notes.

While Lloyd Jacquet claimed that the indicia title of this issue is actually "Fun Comics #1," this is not the case, as shown in the complete indicia as reproduced in Alter Ego (TwoMorrows Publishing, 1999 series) #88 and Famous First Edition: New Fun #1 (DC, 2020 series) #C-63.

New FUN is published monthly at 49 West 45th Street, New York, N. Y., by National Allied Publications, Inc.; Malcolm Wheeler-Nicholson, President; T. J. B. Nicholson, Treasurer; Richard Heins, Asst. Treasurer; R. Andreen, Secretary. Second-class entry pending at the Post Office, Brooklyn, New York. Printed in U.S.A. Copyright 1935, by National Allied Publications, Inc. Single copies, 10 cents; (25 cents in Canada). Subscription price, twelve issues, $1.00 in the United States, Mexico, and American possessions. To all other foreign countries in the Postal Union, $2.60 payable in advance and including postage. The publishers cannot accept responsibility for unsolicited manuscripts or cartoons, although care will be exercised in handling them. All manuscripts and drawings must be accompanied by stamped, self-addressed envelopes for their return if found unsuitable. The contents of this magazine must not be reprinted without permission. Inquiries concerning advertising should be addressed to the Advertising Manager, New FUN, 49 West 45th Street, New York, N. Y.

There is also a coupon on that page addressed: "To New FUN Magazine" asking readers to write in the eight things they like the best in New FUN, and also asking them to write in the name and address of the nearest movie theater.

In a memo dated 1-11-35, editor Lloyd Jacquet wrote this statement: "New FUN - hot off the Daily Eagle press - goes on sale today coast-to-coast." The Brooklyn Daily Eagle of that day also reported the magazine going on sale that day "on the newsstands of the principal cities throughout the United States." That tells us when this issue went on sale, and was printed on the presses used by the Brooklyn Daily Eagle newspaper.

Due to its historical significance, the text of the January 11, 1935 Brooklyn Daily Eagle newspaper article is given thus:

"New Fun Magazine For Juveniles Out

New Fun is the title of a juvenile magazine that appeared for the first time today on the newsstands of the principal cities throughout the United States, according to an announcement made by Malcolm Wheeler-Nicholson, president of National Allied Publications, Inc., 49 W. 45th St.

Major Nicholson has secured the co-operation of The Eagle for the publication of this tabloid-size monthly periodical which is designed to please “boys and girls from 2 to 90” with its predominant pictorial contents of new comic strips and special departments devoted to aircraft, sports, the radio and the movies.

Lloyd Jacquet, formerly on the staff of The Eagle, is the editor of New Fun, which is to be converted from a monthly to a weekly in the near future. He is assisted by Sheldon H. Stark as cartoon editor, Dick Loederer, who was art director in charge of animated cartoons for Van Beuren-RKO Film Corp., is art director of New Fun."

Genre
detective-mystery; western-frontier
Characters
Jack Woods (introduction); Don Nogales (villain, introduction); Miguel
Synopsis
Jack is captured in the middle of the night by Don Nogales and his assistant Miguel. The men carry him to Don Nogales' ranch in Mexico. Once arrived there, Jack manages to ditch the custody of Miguel by his own physical prowess, throwing him to the ground and taking away his gun. When he goes in search of Don Nogales, the fallen man stands with the intention of throwing a knife at Jack.
Reprints

The cover is a one-page story. Based on "The Aristocrat" from Adventure magazine (June 1, 1928). 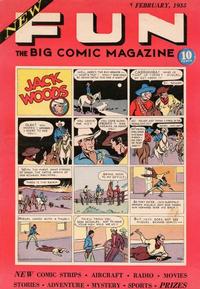 Hello Everybody: Here's the New Magazine You've Been Waiting For! (Table of Contents: 1)

Table of contents and an introductory essay about the comic, plus the indicia and a coupon soliciting reader feedback.

Genre
anthropomorphic-funny animals
Characters
Oswald the Rabbit (introduction)
Synopsis
Oswald goes ice skating, but quickly his feet fly out from under him.
Reprints

Oswald, originally a Disney creation and visually the immediate predecessor of Mickey Mouse, was at this point owned by Universal Pictures. According to Bob Rozakis at http://www.comicsbulletin.com/bobro/103767090390785.htm it was probably the presence of this licensed feature that discouraged DC from reprinting this issue as part of their Millennium Edition reprint series, despite its historic significance.

As there never was an Oswald newspaper strip, these are not reprints. They also feature the black furred version of Oswald, not the then current white-furred version.

This is not Joe Shuster.

Genre
anthropomorphic-funny animals
Characters
Oswald the Rabbit
Synopsis
Oswald continues to ice skate, but his feet come out from under him again.
Reprints

First Line of Dialogue or Text
I know why you have sent for me Le Grande- It is about that arch fiend...
Genre
adventure
Characters
Barry O'Neill (introduction); Le Grande (introduction); Fu-Yah; Ivan; Fang Gow
Reprints

Based on "The Horror of Fang Gow" from Top-Notch Magazine (February 1933).

First Line of Dialogue or Text
Gosh, it's going to rain! We'll never get home!
Genre
adventure; historical
Characters
Bobby (introduction); Binks (introduction)
Synopsis
Pre-teens Bobby and Binks shelter from a storm in an old house. There they spot a crystal ball which glows and expands to engulf them, and they find themselves in Egypt in 4,000 B.C.
Reprints

Genre
anthropomorphic-funny animals
Characters
Oswald the Rabbit
Synopsis
Oswald continues ice skating when he performs one "clever" move too many and ends up flat on his back.
Reprints

Adapted from Sir Walter Scott's novel. Art is not by Tom Cooper as previously stated.

The Dial Twister (Table of Contents: 26)

Photographs of radio stars from Buck Rogers and Thrills of Tomorrow.

Talk of the Talkies (Table of Contents: 29)

A Stratosphere Plane? (Table of Contents: 32)

How to Build a Model of Hendrik Hudson's Half Moon (Table of Contents: 34)

First Line of Dialogue or Text
When Jim Kenyon, bound for California, arrives in New Orleans, the wagon train is but a speck far out on the plain-
Genre
western-frontier
Characters
Buckskin Jim Kenyon (introduction); Trapper Pete (introduction)
Synopsis
Jim Kenyon, en route to California, arrives in New Orleans. Trying to catch up on foot with the departed wagon train, he hears cries for help and rescues a trapper from quicksand. Riding on the trapper's horse after the wagon train they are waylaid by Indians.
Reprints

Beginning a Collection (Table of Contents: 40)

Tips for a young homemaker.

First Line of Dialogue or Text
A long time ago there lived a family with two kids, a boy named Ur and a girl called Wur.
Genre
humor; historical
Characters
Ur (introduction); Wur (introduction)
Reprints

1st Episode: Tad among the Pirates (Table of Contents: 46)

Strips of square frames of art and text designed to be cut out and viewed through "screen" which is another cutout in a larger panel.

First Line of Dialogue or Text
Dear Kids, beginning today we are going to entertain you with our adventures up here in the Arctic.
Genre
anthropomorphic-funny animals; children
Characters
Pelion (introduction); Ossa (introduction)
Reprints

Characters are named after two mountains in Greece. Ancient myths refer to "piling Pelion on Ossa" in order to reach the gods.