Rockin' It in Nashville! (Table of Contents) 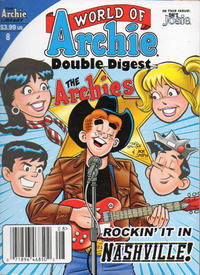 The Archies in Nashville (Table of Contents: 1)

First Line of Dialogue or Text
I can't hold them back...

The Terrible Three (Table of Contents: 9)

'Villians" is how the villains spell it.

reprint from the Sunday newspaper strip.

The Land Of Ooze (Table of Contents: 14)

Betty is like Dorothy in the Wizard of Oz.

A Tale of Two Similars (Table of Contents: 16)

Characters
Archie; Jughead; Art Decko
Synopsis
Jughead takes his camcorder with him when Archie goes to the garage to pick up his car.
Reprints

Script and ink credits from Archie # 510 (apparently the first publication).

The Bathing Beauty (Table of Contents: 17)

A Pair With Flair (Table of Contents: 19)

Credits from the reprint in World of Archie Double Digest (Archie, 2010 series) #79, no credits listed in this digest.

Genre
humor
Characters
Josie; Melody; Pepper; Albert; Alexander Cabot III; Alexandra Cabot
Synopsis
Albert and Alex are fighting over Josie. Alex throws Albert's guitar at him as he's crossing the street, and in saving his guitar, Albert moves out of the way of a car. Melody convinces Albert that Alex saved his life, and a grateful Albert vows to let Alex have whatever he wants -- including Josie. In his gratitude, Albert follows Alex everywhere, never letting him have a moment alone with Josie.
Reprints

First Line of Dialogue or Text
Didn't think that you'd make it in time for our cookout!
Genre
humor; teen
Characters
Archie; Jughead; Mrs. Andrews; Mr. Andrews
Synopsis
Jughead is a guest at the cookout.

Paint by Number (Table of Contents: 23)

Genre
humor; teen
Characters
Archie Andrews [as himself and as Archiemy]; Dilton Doiley; Betty Cooper [as herself and as the peasant girl]; Veronica Lodge [as herself and as Queen Neferonnie]; Reggie Mantle [as Captain Reggiemhun]; Hiram Lodge [as the Prime Minister]; Jughead Jones [as the General]
Synopsis
While in Egypt, Archie's clumsiness helps uncover an ancient tablet.
Reprints
Keywords
archaeology; Egypt

Credits from the reprint in Archie Spotlight Digest: Archie 75th Anniversary Digest (Archie, 2016 series) #3, no credits listed in this digest.

In No Condition to Work (Table of Contents: 28)

Genre
humor; teen
Characters
Archie Andrews; Betty Cooper; Veronica Lodge; Mary Andrews; Fred Andrews; Charlie (Archie's uncle)
Synopsis
Archie gets a job with his Uncle Charlie selling and installing air conditioners, but can he keep his mind on the job, and not on cute girls?
Reprints