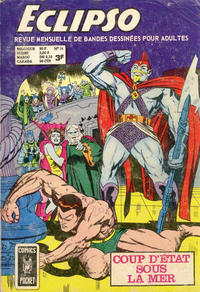 Byrrah, Namor's cousin, is re-introduced from the continuity of the 1950's.
Les 2 histoires originales sont réunies en un seul récit. [The 2 original stories are merged into a single one.]

This is a re-told version of a story from Captain America #1.

Job Number
X-228
Genre
super-héros (superhero)
Characters
Thor [Doctor Donald Blake]; Loki; Heimdall; Odin
Synopsis
Loki uses his magic to cause Thor's hammer to hit his head, turning him evil. Thor frees Loki, and the two terrorize Earth until the other Asgardians arrange for another blow to the head to reverse the change.
Reprints

Genre
horreur-suspense (horror-suspense)
Synopsis
A woman with a terminal illness meets a man who tricks her into becoming a witch.
Reprints

Genre
fantasy (fantasy-supernatural)
Characters
Frank Johnson (introduction); Yucoya-Tzin (introduction, not named); Zzutak (introduction, origin)
Synopsis
An American comic book artist is forced by an Aztec priest to make a monster with magic paints. The artist creates another monster to fight the first, causing the temple to collapse on both monsters, giving the priest amnesia and ending the threat.
Reprints

Narrated in the first person. Frank Johnson, Yucoya-Tzin and all next appear in Fantastic Four Unlimited (Marvel, 1993 series) #7 (September 1994).

Genre
science-fiction (science fiction)
Characters
Glob
Synopsis
A painter is hired to cover a statue with strange paint. The statue comes to life at midnight and goes on a rampage. The statue is an advance agent for an alien invasion, and the painter defeats it by using turpentine to remove the special paint.
Reprints