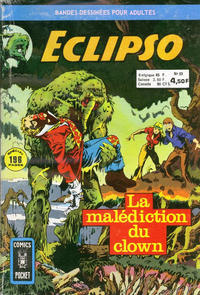 Genre
heroic fantasy (sword and sorcery)
Characters
Conan; Jenna; Halamar; The Winged One
Synopsis
The Winged One's soldiers capture Jenna in a raid on Conan's camp, Conan returns the favor believing The Winged One slain in the fight, as he retrieves Jenna, with the assistance of Halamar.
Reprints

Genre
science-fiction (science fiction)
Characters
Frank [Ulysses Bloodstone] (earliest published appearance according to later continuity); Lynn Avery; Kasenga; Grottu (introduction, origin)
Synopsis
A journalist and an archaeologist go to Africa and find an atomically mutated giant ant with super-intelligence. The giant ant tries to lead an army of insects to world conquest, but is foiled when the humans use sugar to turn his ants against him.
Reprints
Keywords
monsters

In later retcons it is established that Grottu's creation was planned by the Deviants.

Genre
science-fiction (science fiction)
Synopsis
A scientist creates a pill to shrink himself to subatomic size, convinced that whole other worlds exist at microscopic levels. His pill works, and he vanishes into a whole new world called Earth.
Reprints