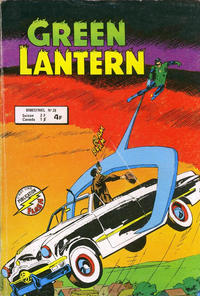 Genre
super-héros (superhero)
Characters
Green Lantern [Hal Jordan]; Green Arrow [Oliver Queen]; Carol Ferris; Black Hand [Wilbur Palm]; Dinah Drake Lance [Black Canary]
Synopsis
While Carol Ferris is in Piper's Dell, the sea wall protecting the town begins to give way, so Hal responds as Green Lantern. After saving the town, GL is given a tour of the plastic factory. Weakened by gas emitted by the plastic pins produced there, he is unable to fight back, so he sends his ring to Green Arrow. When he revives, he finds that his old enemy Black Hand uses the pins to keep the community under his control. He sends GL and Carol out into the streets to face the wrath of the townspeople, but Green Arrow arrives in time with GL’s ring, and GL traps Black Hand in his own plastic.
Reprints

Genre
super-héros (superhero)
Characters
Green Lantern [Hal Jordan]; Green Arrow [Oliver Queen]; Black Canary [Dinah Drake Lance]; Witch Queen; Sinestro; Medusa
Synopsis
When Green Arrow and Black Canary are confronted by harpies, GA calls Green Lantern for help. GL follows the harpies into a trap laid by The Witch Queen on behalf of her brother Sinestro. Following a lead, GA and BC meet a group of Amazons, who, impressed by Black Canary's fighting skills, explain how in the distant past they were banished to another plane by a wizard, but have been allowed to return by The Witch Queen to make all men pay. With this information, the duo follows the trail to The Witch Queen and rescue Green Lantern from banishment and the grasp of the legendary Medusa.
Reprints

Genre
super-héros (superhero)
Characters
Green Lantern [Hal Jordan]; Guy Gardner; Guardians of the Universe; Green Lantern [John Stewart] (intro); Jeremiah Clutcher
Synopsis
When Guy Gardner is injured, the Guardians of the Universe instruct Hal Jordan to train another back-up, but John Stewart has different ideas about how to be a Lantern. When an attempt is seemingly made on the life of racist politician Jeremiah Clutcher, John Stewart figures out that the attack was faked and part of a cynical plot to get Clutcher elected president.
Reprints

The splash page (page 2) is shot directly from Neal Adams's pencils as he handed it in too late for inking. (Source: Man of Two Worlds by Julius Schwartz and Brian M. Thomsen, page 128).