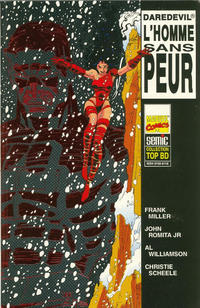 Text article explains how the mini-series came about. Includes art from this issue.

Genre
super-héros (superhero)
Characters
Matt Murdock [Daredevil; as a boy]; Battling Jack Murdock (death); Sister Maggie Murdock; Stick; Fixer (villain); McHale; Gillian (villain); Slade (villain); Marcello (villain); Angelo (villain)
Synopsis
Matt is a young troublemaker in Hell's Kitchen before saving a man's life from an oncoming truck takes his sight. Battling Jack Murdock is a down on his luck aging boxer who gets involved with a mobster who makes him part of his protection racket. Stick is a janitor at Jack's gym and begins to teach the sightless Matt the ways of the warrior. Fixer tells Jack to throw a big fight, but when Battling Murdock wins, the Fixer kills him.
Reprints

This origin update has Stick involved in Matt's training much earlier than supposed. It also has the Fixer himself shooting Jack Murdock (in Daredevil #1, Slade is the trigger man).

Genre
super-héros (superhero)
Characters
Matt Murdock [Daredevil]; GUESTS: Foggy Nelson; Elektra; Battling Jack Murdock (dead); Stick; Stone; Fixer (villain, death); McHale (villain); Gillian (villain); Slade (villain); Marcello (villain); Angelo (villain)
Synopsis
Matt goes after his father's killers. The Fixer has a heart attack as he is pursued. When confronting the last of the Fixer's men, Matt accidentally kicks a prostitute out of a window and she dies. Stick gives up on Matt because of his quest for vengeance. Matt starts college and begins rooming with Foggy. On a late-night jaunt through the city, Matt meets Elektra and gives her chase.
Reprints