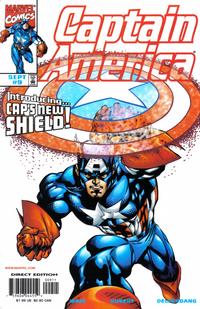 Recap of story to date and profiles of the main characters in the story.

American Nightmare, Chapter One: The Bite of Madness! (Table of Contents: 2)

Genre
superhero
Characters
Captain America [Steve Rogers]; Sharon Carter [Agent 13]; Jack Patterson; Mr. Genuardi; Luis Ramirez; Alma Ramirez; Javier Ramirez; Marta Ramirez; Mike Ranier; Rosa Ramirez; VILLAIN: Rhino [Aleksei Sytsevich]
Synopsis
Steve Rogers returns to Brooklyn to reestablish his roots, and Sharon Carter (fresh from FURY/AGENT 13) is right behind him! But Steve finds a big surprise waiting for him in his apartment, and believe us, it's the last thing you'd ever expect to see! Plus: More and more public figures are going out of their minds, and Sharon is on the case, but her investigation points the finger at... The Rhino?! Cap gets his new energy shield.
Reprints

Credits acknowledge thanks to Eliot Brown.