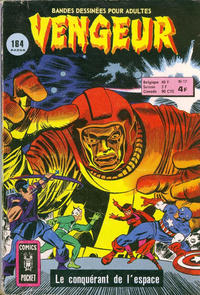 Genre
espionnage (spy)
Characters
Nick Fury; Val [Contessa Valentina Allegro de Fontaine]; Dum Dum Dugan; Jimmy Woo; S.H.I.E.L.D.; Chet Huntley (N.B.C. News); Vaengr
Synopsis
As Fury begins to doze off in his office he gets a call from Val about a UFO. Landing in mid-town Manhattan a news crew and crowds gather to observe the emergence of an alien named Vaengr. He offers them The Prism Of Miracles which will banish hatred, crime, war and violence. Fury, Val & Dugan search the spaceship and discover Vaengr is not what he seems. Val & Dugan are fried to ashes by the alien who mutates into a monstrous insect-like form and gloats about his destruction of earth. Fury is awakened from his nightmare by Dugan, who tells him of a report just in about a UFO...
Reprints

A peaceful alien offering a gift pays tribute to THE DAY THE EARTH STOOD STILL (1951), while an alien invasion which turns out to be a nightmare-- which starts all over again at the end of the story-- pays tribute to INVADERS FROM MARS (1953).