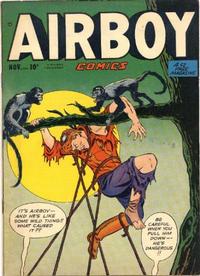 [The Malobia Monkeys] (Table of Contents: 1)

The Jockey's Dream (Table of Contents: 2)

Genre
horror-suspense
Characters
The Heap [Baron Eric von Emmelman] (origin re-cap with added details]; Baron von Emmelman (flashback, death); Count Bartos (death); Franz Bartos (villain, son of the Count, a werewolf, death)
Synopsis
Count Bartos is angry at his son because he will not go out and hunt wolves as he has done before. However, Franz claims the wolf they are after is a werewolf! Franz agrees to the hunt and faces the creature which bites him before the werewolf is killed. A few years later, the Baron and Franz are in the same air squadron, and Franz, at first, refuses to fly because of a full moon. When he does and crashes, the Baron sees a wolf at the controls.....and seconds later is shot down. Many years later, the Heap is drawn to Hungary and seeks out the Count's son, and later destroying him.
Reprints

The Zurich Flyer (Table of Contents: 4)

Gotch and the Big Indian (Table of Contents: 5)

Signed in first panel left. Torbert is credited to Hillman sports 1949 by Jerry Bails' Who's Who.

Prentice is credited to "Swifty Chase" by Jerry Bails' Who's Who, and he is spotted by his sober faces with tight mouth and long chin, and excellent hands. He is most known for his work on Rip Kirby.