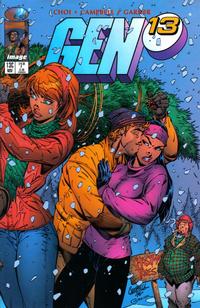 First Line of Dialogue or Text
Along route 666 in the land of S.A.
Genre
superhero
Characters
Gen 13--Fairchild; Grunge; Rainmaker; Freefall; Burnout; GUESTS: Madman; Maxx; Shi; Francine; Katchoo; Ann O'Brien; Monkeyman [Axewell Tiberius]; Hellboy; Wolverine; Anthony Robbins; The Wizard [John Lynch]; VILLAINS: Lady Mortem [Lady Death]; Witchblade; Frenzy Beast; Marvel Zombies
Synopsis
Grunge is stuck in the dimension of Sequential Art trying to rescue the Wizard from the Frenzy Beast. With help from a number of familiar cross-company characters and a pep talk by real life motivational guru Tony Robbins, Grunge finds the strength within himself to forsake his collection and rip the chromium covered comic he desires which destroys the Beast and sends him home to his friends.
Reprints

The irony is not lost on this indexer that a comic story basically reviling the mid-90's speculative driven comic market was published in a gimmick format (three different issue thirteens) and was also offered with a limited variant cover.