This cover is probably an Australian original. 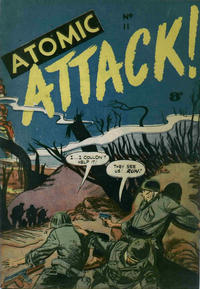 Medal of Honor (Table of Contents: 1)

This story begins on the inside front cover.

It is possible that the unclear signature isn't "Vincent", but the scratchy linework with solid blacks looks similar to other work by Vince Napoli.

The Reds Attack (Table of Contents: 3)

The first page of this story has the original printing noted in the margin: "Battle #15". The story ends on the inside back cover.

[Terry Lee and the Secret Agents] (Table of Contents: 4) (Expand) /