Secret of the Lost Temple! (Table of Contents) 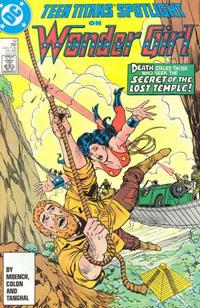 Job Number
G-3047
First Line of Dialogue or Text
Breakfast at the home of Donna and Terry Long:
Genre
superhero
Characters
FEATURE: Wonder Girl; GUESTS: Terry Long; Denny Heiman; VILLAINS: Drug Runners
Synopsis
Terry jets off to El Salvador to meet up with an archaeologist buddy and Donna has to fly in and save them both from drug runners.

Romeo Tanghal's name accidentally left off the credits, with a blank space where it should be.

The Shadow / promo (ad from the publisher) / 1 page (report information)