Thief of Time ! (Table of Contents) 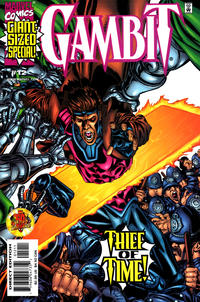 Genre
superhero
Characters
Gambit; Jean-Luc LeBeau; Courier [Jacob Gavin]; Sekmeht Conoway; Tantie Mattie; Grigori Mengo; Stanislaus Mengo; Tithe Collector; Doombots; Candra (flashback)
Synopsis
Gambit learns from his father that he is required by destiny to go back in time and face Candra in order to preserve the Thieves Guild. Gambit gets Latverian bad boys, the Mengo Brothers, to sneak him into Doom's castle so he can use the villain's time platform. Being hounded by Doombots the entire way, Gambit and Courier successfully use the platform and head back to the past.
Keywords
time travel

The Sunset Dawn Book 1 Chapter 2: It Takes a Thief (or Perhaps a Dozen) (Table of Contents: 2)

Genre
superhero
Characters
Gambit; Courier [Jacob Gavin]; Adam Worth; Jacques LeBeau; Jean-Luc LeBeau; Belize Marceaux; Tithe Collector; Candra
Synopsis
Gambit and Jacob arrive in the London of 1891. They track down legendary thief, Adam Worth, and ask him to lead them to the current Thieves Guild. Gambit catches up with the Thieves Guild leader, his grandfather Jacques LeBeau, in the lair of Nathanial Essex (known to most of us as Mr. Sinister). Jacques takes knowledge of Essex' work to Candra in hopes that she will return to her role as benefactress of the Guild. He also wants her to release his son, Jean Luc, whom she has been holding captive. Gambit and Jacob discreetly follow.

Sven Larsen credited as research help for this segment; Adam Worth (1844-1902) is an actual historical figure and is reputed to be Arthur Conan Doyle's inspiration for Professor Moriarty; One of the last of the gentlemen thieves, he is probably most well known for stealing Gainsborough's painting "The Duchess of Devonshire" which he personally kept for 25 years before discreetly returning it to the Pinkertons; For more reading on the subject, please see "The Napoleon of Crime: The Life and Times of Adam Worth Master Thief" by Ben Macintyre.

Genre
superhero
Characters
Gambit; Jacques LeBeau; Jean-Luc LeBeau; Belize Marceaux; Adam Worth; Tithe Collector; Candra
Synopsis
Candra sends Jacques LeBeau and his Guild to New York to track down Nathanial Essex for her. Gambit saves Jean-Luc (his father as a child) from Candra and prepares to chase the Guild to New York in hopes of reaching Essex first.

Anti-Drug Story inserted into a number of comics.