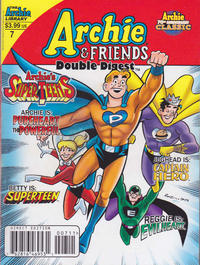 Story is in two parts.

The Pitcher (Table of Contents: 7)

Genre
humor; teen
Characters
Archie Andrews; Reggie Mantle; Betty Cooper; Veronica Lodge
Synopsis
Archie causes Reggie to strike out by throwing him a screwball. Betty comments that Archie throws the best screwballs in the league. Reggie says that it figures - it takes one to throw one.
Reprints

The Case of the Malted Falcon! (Table of Contents: 9)

Genre
adventure; humor; teen
Characters
Chuck Clayton; Charles Clayton (flashback); Archie Andrews; Betty Cooper; Veronica Lodge; Fred Greenman; Delbert the Dealer; Professor Jacko; Harry Charley; Hiram Lodge; Jose Santos; Linda Lane; Jim Brench; Vicki Brench; Fernando Ruiz; Dan Parent
Synopsis
Chuck Clayton finds out that his grandmother has a copy of the oldest known comic, a comic created by his ancestor Charles Clayton during the Revolutionary War. It is first displayed at a local con, then at Chicago Con and finally at San Diego Con. Wherever it is displayed, someone has been trying to steal it, until the thief is caught at San Diego.
Reprints

George Gladir is credited with Script and Bill Golliher with Pencils in the original printing of this story.

Names of the real-world characters are changed in this reprint.

Charles Clayton is Chuck's ancestor who was a cartoonist during the American Revolution.

There are many in-joke references to parts of comic fandom. For instance, the Wendell Comics characters of Wendell, Brenda and Cobina, which are spoofs of Archie, Betty and Veronica. Archie is continually being mistaken as Wendell by comic fans, and Betty and Veronica enter the three of them in the costume contest at San Diego as the Wendell Comics characters.

She Doesn't Compute! (Table of Contents: 18)

Header page for the next section that contains reprints from Archie's Weird Mysteries comic.

Mystery of the Mole Monster! (Table of Contents: 23)

Genre
humor; teen
Characters
Reggie Mantle
Synopsis
Reggie asks a girl if she could love a guy like him.
Reprints

Genre
humor; teen
Characters
The Archies [Reggie Mantle; Archie Andrews; Betty Cooper; Jughead Jones; Veronica Lodge]
Synopsis
The Archies try to think up a new act to win a talent show but after watching everybody else doing new things they stay with their original act and win the show.
Reprints

The Rescuer (Table of Contents: 34)

Genre
humor; teen
Characters
Archie Andrews
Synopsis
Archie is a lifeguard and offers to help rescue a pretty girl if the water is too cold.
Reprints

Unscramble the code to find the phrase.

The Experiment (Table of Contents: 40)

Title page for the next section containing Archie 1 reprints. Archie 1 is a series where the characters from Archie's comics all live in prehistoric times.

Genre
humor; teen
Characters
Archie Andrews 1; Jughead Jones 1; Betty Cooper 1; Veronica Lodge 1; Reggie Mantle 1
Synopsis
Prehistoric Veronica declares that the summer season has begun, and convinces everyone except Jughead that the civilized thing to do in summer is to go to the shore to get a tan.
Reprints

The Backwards Advance (Table of Contents: 48)

Genre
humor; teen
Characters
Archie 1; Betty 1; Veronica 1; Jughead 1; Reggie 1; Big One
Synopsis
Prehistoric Reggie invents the bow and arrow (which he calls a "vine and stick"), but it only works when it's used backwards. Reggie stubbornly insists on using it the way he invented it.
Reprints

Buy Three Books and get the Fourth Free! (Table of Contents: 50) (Expand) /

Genre
humor; teen
Characters
Archie Andrews [Ultimo the Ultimate Teen]; Betty Cooper; Veronica Lodge; Dilton Doiley
Synopsis
Betty and Veronica are tired of Ultimo and his constant attention by other girls and decide they would rather have Dilton.
Reprints