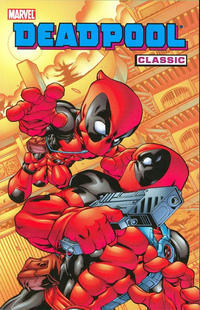 From the Pages of Deadpool--Deadpool! (Table of Contents: 1)

Genre
humor; superhero
Characters
Deadpool [Wade Wilson]; Beyonder; C.F.; Patch; Oyakata; Sazae; Widdle Wade (death); Daruma; Shigeru (death); The Boss
Synopsis
In the distant past, Deadpool interferes with the Beyonder's plan. Shigeru creates a clone of DP, Widdle Wade. In the present, the Boss contacts Deadpool and tells him that a killer is on the loose and asks him to protect the next target, Oyakata, whom he knows. 'Pool travels to Japan where he encounters Widdle Wade and fights him off. In the past, Deadpool is also reunited with Oyakata's daughter, Sazae. Widdle Wade attacks again. 'Pool tells Sazae that he was the one who killed all of her father's old targets, thus restoring him to honor in his daughter's eyes.
Reprints

The opening Beyonder sequence claims to be continued in Secret Wars III #2 (a thoroughly fictitious comic).

Our Second Most Confusing Issue Yet...After Issue #6 (We Would've Said #9, But That Was Just Bad, Not Confusing) (or Mouthful of Malice, Head Full of Cheese) (Table of Contents: 4)

Genre
superhero
Characters
Deadpool; Monty; Ilaney Brukner; Alestaire Grunch; Mercedes (Illusion); A.I.M.; The Hand; Blind Al; Dr. Bong
Synopsis
After the mind shattering events of Dead Reckoning, Pool sets up a new base in Bolivia with a new crew made up of Monty and Ilaney. Spinning through a few wild adventures, Deadpool ends up seeing a strange woman riding a giant sabretooth rabbit instead of the AIM agents he should really be fighting. He seeks psychiatric help and his chosen shrink, Dr. Bong, proclaims him flippin' nuts.
Reprints

Look--It's Wolverine...In His Most Gratuitous Guest Appearance Ever! (Table of Contents: 5)

It's a Barbarian Bunny-- Busty Broad Bonanza in the Brainpan -- And I'm the Only One Invited! (Table of Contents: 6)

I Can't Place the Name, But the Face Rings a Southern Belle... (Table of Contents: 8)

Genre
superhero
Characters
Deadpool; Monty; Mercedes; Ilaney Brukner; Alestaire Grunch; Bullseye; T-Ray
Synopsis
Deadpool tracks down the woman who has been invading his sanity, his long dead wife Mercedes. Unfortunately, Bullseye hot is on her trail and trying to kill her all over again.
Reprints

The Dead Rise To Claim Their Own! (Table of Contents: 9)

Genre
superhero
Characters
Deadpool; Monty; Mercedes; Alestaire Grunch; Black Talon; Zombies
Synopsis
Deadpool is reunited with his wife from his pre-merc life but their reunion bliss is interrupted by the Black Talon and a horde of zombies. Pool takes down the Talon but not before he learns that the zombie master believes Mercedes to be undead.
Reprints

Truth and Lies (Table of Contents: 12)

Genre
superhero
Characters
Deadpool; Monty; Mercedes; Ilaney Brukner; Alestaire Grunch; Patch; C. F.; Fenway; T-Ray
Synopsis
Wade and Mercedes reminisce about their old life together. Deadpool heads to Hellhouse and helps Patch and his old merc pals lead a little revolution against T-Ray's influence. When T-Ray strings up Monty and leaves him for dead, Pool realizes that his old enemy is back in action.
Reprints

Giving Up the Ghost (Table of Contents: 13)

Genre
superhero
Characters
Deadpool; Monty; Mercedes; Ilaney Brukner; Zoe Culloden; Herbert; T-Ray; Blind Al; Gerry
Synopsis
Deadpool takes the injured Monty to Landau, Luckman and Lake to get a little healing. Zoe is less than pleased to see him and arrests the merc with a mouth. Finding that Monty loves her, however, Zoe has a change of heart and quits the firm as she frees Deadpool and teleports away with her new flame. Deadpool and Mercedes take the same teleporter which lands them right in the arms of T-Ray.
Reprints
Keywords
Landau Luckman and Lake

Who Is Deadpool? T-Ray Is Dying to Find Out! (Table of Contents: 15)

Genre
superhero
Characters
Deadpool; Mercedes; Ilaney Brukner; T-Ray
Synopsis
Deadpool and T-Ray relive the past as they battle for all the marbles. In Deadpool's memories, he and his wife, Mercedes, were living a normal and ideal life when they saved T-Ray from death and were repaid when the villain brought violence into their home. Much to Pool's surprise, however, T-Ray reveals that he isn't the one who killed Mercedes Wilson--Deadpool did.
Reprints

The cover copy is a clever reference to the movie "Face Off" in which John Travolta and Nicolas Cage switch faces and identities.

Genre
superhero
Characters
Deadpool; Mercedes; Death; Thanos; T-Ray
Synopsis
T-Ray's real name is Wade Wilson and Deadpool is the violent monster who killed his wife. With this mind bending, origin shattering revelation on the table, Deadpool shrugs it off and battles T-Ray and Mercedes anyway. With the fight ending inconclusively, Pool is then forced to re-fight all of the people he has taken down in his long and violent life. He is 99% killed and has a reunion with his old flame, Death.
Reprints

Children's story illustrated with black and white pictures patterned after the work of Robert McCloskey.

The Etiquette Lesson (Table of Contents: 23)

Parody of Barney the Dinosaur.

The Alphadead (Table of Contents: 25)

Parody of a children's alphabet book.

A paint-by-numbers picture of Deadpool playing poker with dogs.

Credits and Due Blame (Table of Contents: 27)