Second printing cover has only 75cent cover price and says "Second Printing" in the indicia.

Jim Owsley is credited as "crew chief", and Jim Shooter is credited as "pit boss". (The story sequence starts with race cars.)
This issue is a variant of The Transformers (Marvel, 1984 series) #9 [Direct]. There exist further variants:

The Lady's Name Is... Circuit-Breaker! (Table of Contents) 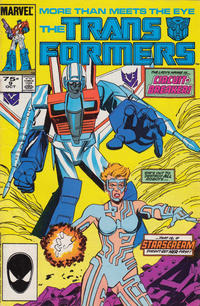 How to Read the X-Men and the New Mutants This Summer (Table of Contents: 2) (Expand) /