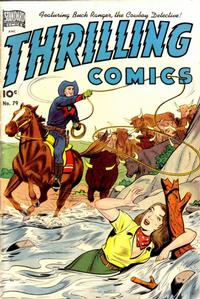 The Stagecoach Gang (Table of Contents: 1)

bottom half of page ad for Slinky

Peril on the Prairie (Table of Contents: 4)

Pencils previously credited to 'John Celardo?', but compare the layouts in particular with the signed story in issue 80 or with his Tarzan newspaper strip. Part of this story, such as the first panel on page 4 and panel 7 on page 5, looks like pure Frazetta, both pencils and inks. There is evidence of some Celardo inks, the face of Bily West on panel 5 of the first page, for example, with typical Celardo cross-hatching on the cheeks, but much of this story by another inker.