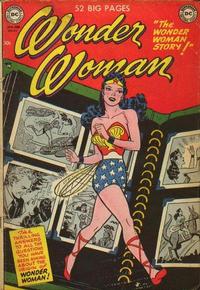 The Wonder Woman Story! [Part One] (Table of Contents: 2)

Genre
superhero
Characters
Wonder Woman [Diana Prince]; Queen Hippolyte; Mary Ellen; John Lane; Aphrodite; Hercules
Synopsis
A female reporter gets the scoop that will win her a job at the Daily Globe over her male rival: the secret story of Wonder Woman and the Amazons.

Wonder Woman was herself hired as the Romance Editor at the Daily Globe in Sensation Comics (DC, 1942 series) #97.

Hippolyte does not forbid Diana from participating in the contest, as she has in the past; instead, she doubts her daughter will fare that well against her sisters. Diana participates anyway, disguised in a mask.

The robot plane is called a gift of Aphrodite, and is said to be controlled by the sound of Wonder Woman's voice, as opposed to telepathically controlled. Later stories are inconsistent on which is correct.

Genre
biography
Synopsis
Story of Helene Kottauer (1410-1470), who made a perilous journey to crown the son of the dead Emperor of Austria, and whose records of court life were cherished for centuries.

The Amazon and the Leprechaun! (Table of Contents: 11)

How to Bring Christmas Cheer (Table of Contents: 14)

"Gentlemen Be Seated" (Table of Contents: 15)

Genre
superhero
Characters
Wonder Woman [Diana Prince]; Etta Candy; Holliday Girls; Bill Cloud; Cal Cloud; Luke Tyler; Susan Smith
Synopsis
Wonder Woman and the Holliday girls travel to the "New West" for a wedding that may be cancelled when the groom's father is suspected of resuming his career as a stagecoach robber.