What If Elektra Had Lived? (Table of Contents) 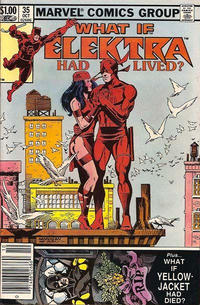 ...What if Bullseye Had Not Killed Elektra? (Table of Contents: 1)

And Thus are Born The Cat People! (Table of Contents: 3)

Genre
superhero
Characters
Watcher; Ebrok (dies); Orann, Yanthon; Cat People [Flavius, Helene, Tigra (Florence), Balkatar (Tegnar)].
Synopsis
In the Middle Ages, the sorcerer Ebrok created a spell to transform cats into humanoids. When his fellow sorcerers saw them, they became envious and Ebrok was obliged to create more Cat People for them. Later, the sorcerers became alarmed at the rapidly-growing race and banished them to another dimension. However, Ebrok's two creations evaded them and learned to pose as humans. When Oran discovered them, he attacked. Blocked by the sorcerers from creating more allies from cats, Flavius modified the spell to create Cat People from humans and used it to create the first Tigra.
Reprints

What if: Yellowjacket had Died? (Table of Contents: 4)